The Ruby environment can be seen with 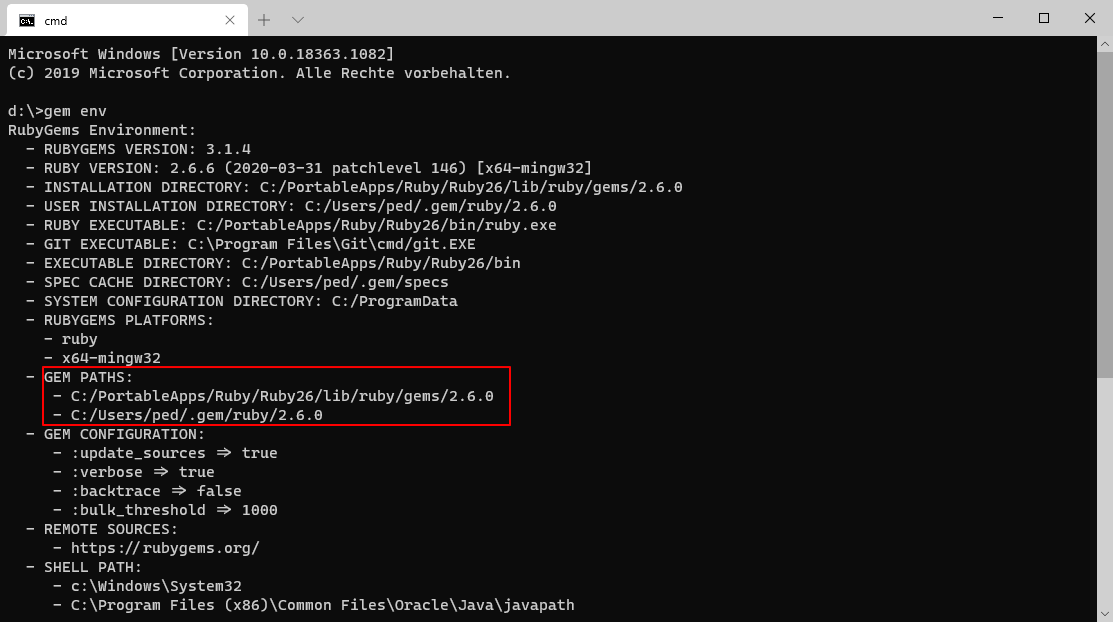 Where are the paths (listed under GEM PATHS) stored, so that “gem env” can display them?

I’m asking, because I would like to remove one of the paths. The picture above shows the environment on my private computer. On my business computer, the second path is a network path, where I do not have write permission. Before contacting the IT I would like to change the path to a location where I have permission.

By the way: I’m using the portable version of ruby 2.6.6 on Windows.

Where are the paths (listed under GEM PATHS) stored, so that “gem env” can display them?

They appear to be stored in the environment variables GEM_HOME and GEM_PATH.

They appear to be stored in the environment variables GEM_HOME and GEM_PATH .

What exactly do you mean with "environment variables’? In my windows environment there are no variables GEM_HOME and GEM_PATH.

Calling ENV inside irb leads to: 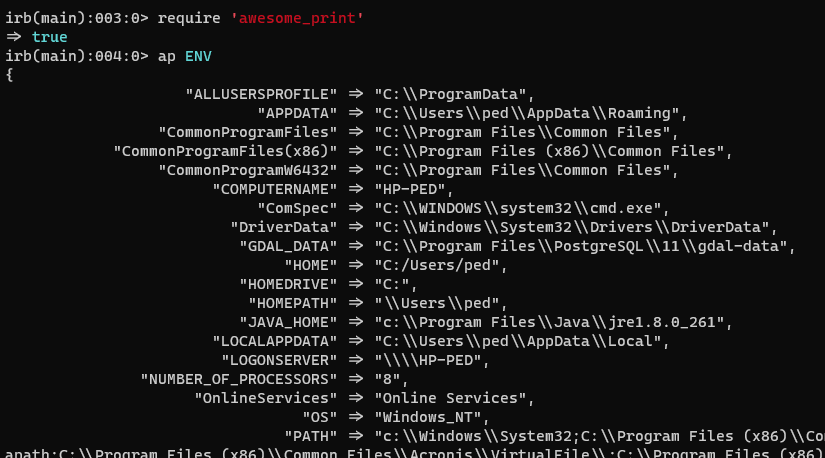 So, the question is still valid: How does the command gem env know what do list under “GEM PATHS”?

The first item is c:/PortableApps/Ruby/Ruby26/lib/ruby/gems/2.6.0, which is the default folder of my Ruby.

But how is the second item C:/Users/ped/.gem/ruby/2.6.0 created? Probably by doing on the fly this:

What exactly do you mean with "environment variables’?

I mean https://docs.microsoft.com/en-us/windows/win32/procthread/environment-variables
When using windows at work, I can access them through the control panel.

They are what ENV is accessing: https://docs.ruby-lang.org/en/2.7.0/ENV.html
So your ‘HOMEPATH’, ‘HOMEDRIVE’ are (windows) environment variables.

What is the value of ENV['GEM_PATH']

This makes sence, because the object ENV has no key GEM_PATH.

I tried to illustrate my question with several screenshots, but unfortunately as a new user I am only allowed to insert one picture in an answer. So i have to move on with only text instead of screenshots.

IT has mapped my HOMEDRIVE (usually c:) to a network directory.

But there is no directory H:/.gem/ruby/2.6.0. For this reason I wondered how the directory gets into GEM PATHS. It would be great if I could tell ruby to use instead H:/Documents/.gem/...